Youth is served in San Antonio, Colorado Springs in crucial victories for both 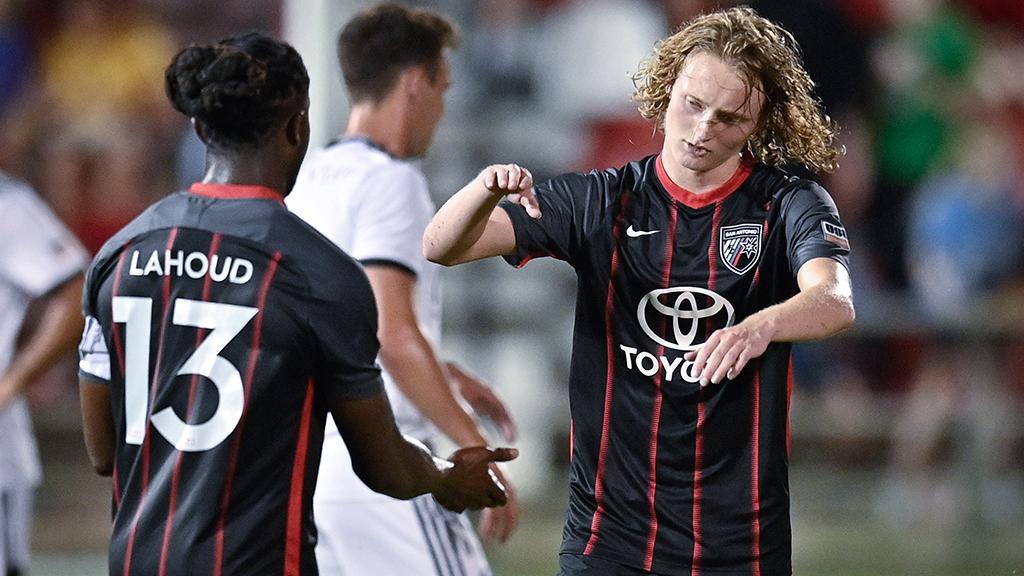 There were few teams that needed victory this past weekend more than San Antonio FC.

Entering its contest against Reno 1868 FC without a win since April 26, SAFC had slumped to 16th place in the Western Conference going into the week, six points out of the playoff positions.

So, when Reno took a two-goal lead less than 20 minutes into their clash at Toyota Field – the second goal coming off a poor SAFC decision in its own penalty area – a third consecutive league defeat looked like it might be on the cards for the hosts.

In the span of 89 seconds just past the hour-mark, Ethan Bryant and Jose Gallegos turned a deficit into a lead for San Antonio and sent the hosts onto a 3-2 victory that might prove a turning point for the club’s season.

An Academy signing, Gallegos’ game-winner was his first in the professional ranks. Not bad for someone who had just completed his end-of-semester exams.

“We have kept him in touch with the team the last couple of weeks and just waited for him to have an opportunity,” said SAFC Head Coach Darren Powell. “Jose is still a very young player and has a lot of work left to do, but ... we wanted to maybe change it up to get some fresh legs in there, so Jose came in and did well and now it is going to be very competitive in that area of the field.”

There’s also still a lot of work left for SAFC as well to get back into the playoff race in the Western Conference, starting with two difficult road trips to OKC Energy FC and Fresno FC in the next two weeks, but the audacity of youth paid off for Powell’s side on Saturday.

1. By comparison to Gallegos, the fact that Ethan Bryant found the net to bring SAFC level after Ever Guzman had begun the comeback just before halftime was far from out of the ordinary. Now in his second year as an Academy signing, Bryant missed the past couple of months with injury and is still getting back to full fitness, but the qualities he brings in completing 34 of 40 passes, recording three shots and one key pass were on show throughout his 79-minute performance.

2. Having come through the SAFC Academy with Gallegos, Bryant was also delighted for his teammate to have such an impact in only his third appearance for the side. “It’s an awesome moment and one that I will remember for the rest of my life and the rest of my career,” said Bryant. “I am really happy for Jose, he deserves it. He is a hard-working player that I have known and played with for a long time, so to have that happen tonight is really special.”

3. Strange as it may seem, neither Bryan nor Gallegos were the youngest player to find the net at Toyota Field on Saturday night. That distinction fell to Reno 1868 FC’s Cade Cowell, who notched his side’s second goal and in the process became the second-youngest goalscorer in the Championship’s history at the age of 15 years, 7 months and 25 days old. Cowell, who earlier this year signed as a Homegrown Player with the San Jose Earthquakes, drew some headlines in March as he scored in the Quakes’ 2-1 exhibition loss against Liga MX’s CF Monterrey. Saturday’s game marked his first start in an official game, and likely made the spotlight on his progression this year with 1868 FC a fraction brighter.

4. The only player younger than Cowell to have scored in the Championship? That’s still current Canada Men’s National Team and Bayern Munich player Alphonso Davies, who was 15 years, 6 months and 13 days old when he opened his professional account for Vancouver Whitecaps FC II during the 2016 season.

5. It wasn’t just Toyota Field where a young standout made a difference on Saturday night, either. For Colorado Springs Switchbacks FC, 16-year-old Logan Dorsey notched the second goal in the club’s 3-0 win against Tacoma Defiance that saw the side build on its important victory the week before against Fresno FC. The Colorado Rapids Academy standout might have taken the ACT earlier in the morning before making the drive to join the Switchbacks later in the day, but facing the test of a professional debut, Dorsey passed with flying colors.

6. With Jordan Burt continuing his recent run of form in front of goal and Ish Jome notching the late insurance goal, the Switchbacks are trying to claw their way back into things. After getting standout displays earlier this season from fellow Rapids Academy product Abraham Rodriguez, this time it was Dorsey’s turn to shine. “We had a good performance,” said Dorsey. “I was happy to come on and get a chance. It was a good team performance, everyone played really well, and it was just good to get a goal tonight.”

7. At the positively ancient age of 22 years old, Dre Fortune is a seasoned veteran compared to some of the other players we’ve mentioned previously here, but the North Carolina FC midfielder was another example of the productivity from the Academy systems run by the Championship’s independent clubs this weekend. A pair of goals sent NCFC to what might now stand as its most impressive victory of the season as it knocked off Eastern Conference leader the Tampa Bay Rowdies in a 3-1 victory at Al Lang Stadium that ended the Rowdies’ undefeated start to the league season.

8. The night was an unsatisfying one for Tampa Bay, which saw its attack really misfire for the first time this season. Back-to-back chances for Sebastian Guenzatti and Juan Tejada in the 23rd minute fell by the wayside, while the night was dotted with other near-misses and a six-save performance by NCFC goalkeeper Alex Tambakis that left the hosts with nothing to show for their 17-4 advantage in shots aside from Zach Steinberger’s goal early in the second half that halved Tampa Bay’s deficit.

9. “I think we had opportunities when we got it back to 2-1,” said Rowdies Coach Neill Collins. “We had great passages of play where I think everyone in the stadium thought we would get the second and make a real game of it. It’s unusual for this group to feel defeat, especially in the league as we’ve not had it. It’s an unusual feeling and one we don’t like, but like every other game, we’ll learn from it quickly and move on.”

10. While the Rowdies were being handed their first loss of the regular season, later on Saturday night New Mexico United suffered its first loss at home in its history as Sacramento Republic FC put in a decisive road display at Isotopes Park to come away with a 3-0 victory. With one point from two home contests in the past week after Wednesday night’s draw with OKC Energy FC, this feels like the first serious bump in the road for NMU and it will be interesting to see how the side responds as it gets set for an extensive road trip over the remainder of this month and well into July with a chasing pack starting to gather steam behind it.

11. For Republic FC’s part, its past two outings have looked much more the part of the side that was expected to be at the top of the Western Conference this season. The visitors comfortably took the sting out of the game in the first half as New Mexico’s rotated lineup sorely missed Santi Moar’s skill and energy, and even after the Spaniard was introduced as a halftime substitute Sacramento’s defense did well to bend but not break to the renewed sense of energy coming from its hosts. Two late goals – including Cameron Iwasa’s seventh of the season – put the game away comfortably and continued the momentum Head Coach Simon Elliott’s side seems to have been building since it’s thrilling late Lamar Hunt U.S. Open Cup victory against Fresno FC on May 29.

12. If Republic FC is now rounding into form, at Phoenix Rising FC it might be full steam ahead after Friday night’s 11th consecutive victory on $1 Beer Night at Casino Arizona Field. With 12 shots on goal – and Junior Flemmings generally giving Luca Lobo and the rest of the Roughnecks defense the runaround all night – there was an ominous sense for the rest of Rising FC’s opponents this season that this might be the sort of reception they’ll get when visiting the desert.

13. “I thought we were good, first half was really good,” said Rising FC Head Coach Rick Schantz. “We've been working a lot on the midfield three and the front three and I think we gave Tulsa a lot of trouble and they couldn't really play out of the back.”

14. The only question hanging over the finale of the contest will be how Phoenix can adapt to the departure of Flemmings for Concacaf Gold Cup duty with Jamaica this week. The 23-year-old’s brace against the Roughnecks gave him 30 regular-season goals for his career in the Championships, tied for 10th in the league since he joined the New York Red Bulls II at the start of the 2016 season. Flemmings’ ability to stretch the field has been a major addition to the Rising FC attack and could be a tricky spot to fill while he’s away.

15. While Phoenix’s attack was flying high as a group, Jerome Kiesewetter’s solo act for El Paso Locomotive FC continued as the club continued its rise up the Western Conference with a 3-0 win against the LA Galaxy II at Southwest University Park. Now sitting with nine goals in nine games since his arrival, the former United States Men’s National Team member is on the verge of taking the lead in the race for the Championship’s Golden Boot as he spearheads Locomotive FC’s attack.

16. El Paso is now undefeated in its last eight league contests having put the blip of its Open Cup defeat behind it comprehensively with victories in its last two outings. That’s moved the side into fourth place – level on points with Phoenix and just two back of New Mexico United – and poised for more. “We have standards set that we try to achieve every game,” said Locomotive FC Head Coach Mark Lowry. “Eight games unbeaten is great, but we want more. That’s the culture we have created here. There is a group of guys there that want to be the best, that want to put something beautiful on the field every time they step out there.”

17. Don’t look now, but Hartford Athletic might be on its way to something good. A 2-1 win against Saint Louis FC on Saturday night – who might be excused some rust after its travails with Mother Nature saw the side play just twice in the league in May – gave Head Coach Jimmy Nielsen’s side its first home victory in club history and a four-game undefeated streak in league play overall. Remarkably, after its 10-game winless start to the season, Hartford is now only four points back of the 10th and final playoff place as Pittsburgh Riverhounds SC – currently favored as the most likely side to break out of the lower half of the standings – faltered again after losing a two-goal lead at home to Ottawa Fury FC.

18. “I think, obviously, we're seeing big progression,” said Nielsen after his side’s second league win of the campaign. “I think the team is taking shape now and the guys are getting a good feeling of each other right now, and it is hard to be a new team, but I think we see things start going hand in hand more and more now.” While Nashville SC will be a serious test of the Athletic’s credentials next weekend, the three games that follow against Birmingham Legion FC, Bethlehem Steel FC and Memphis 901 FC could see the light at the end of the tunnel become even brighter over the next 30 days.